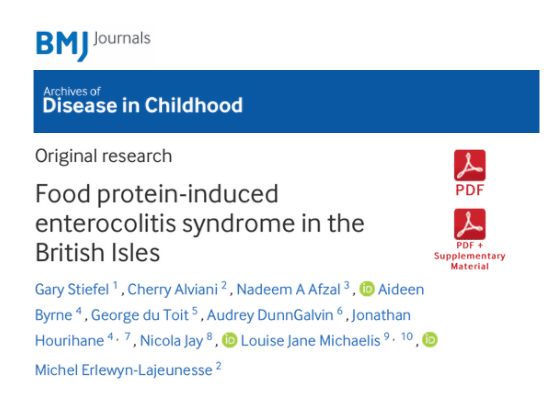 Published in Archives of Diseases in Childhood, August 2021

Food protein-induced enterocolitis syndrome (FPIES) is a delayed type of non-IgE-mediated food allergy, most often seen in infants. An acute FPIES reaction is serious as it can mimic shock, however it can often be misdiagnosed, leading to under-recognition and delay for treatment. To better understand the incidence of FPIES, the common food triggers and the patient journey, this is the first prospective survey of FPIES in the UK and Ireland.

A total of 204 cases were reported, with n98 (52% male) meeting the epidemiological case definition of FPIES. Of these 93 (94.8%) were from England, resulting in an incidence of FPIES in England of 0.006% (0.6 per 10 000 live births per year). The median age at the first reaction was 6.0 months, all cases (n26, 100%) of multiple food-triggered FPIES reacted before 9 months compared with 53/72 (74%) of single-food FPIES. Cow’s milk was the most frequent trigger causing 24% of reactions, followed by fruits and vegetables (19%), hen’s eggs (16%) and fish (14%). Follow-up was arranged in 95% of the cases (55% paediatric allergist, 65% dietitian involved) and an FPIES action plan was provided at discharge in 68% of cases. There was a significant delay in FPIES diagnosis with many infants experiencing 3 or more FPIES reactions before a diagnosis was confirmed.

This first prospective FPIES study estimated an incidence of 0.006% in England, however the authors conclude that this is likely to be an underestimate due to clinician under-recognition and also because allied health professionals and GPs were not included in the survey and may often manage milder cases. It also highlights the need for further education and improvement of recognition of FPIES to better ensure that infants are diagnosed earlier and offered a suitable treatment plan.