Decision‐Making Regarding ONS for Nursing Home Residents With Advanced Dementia 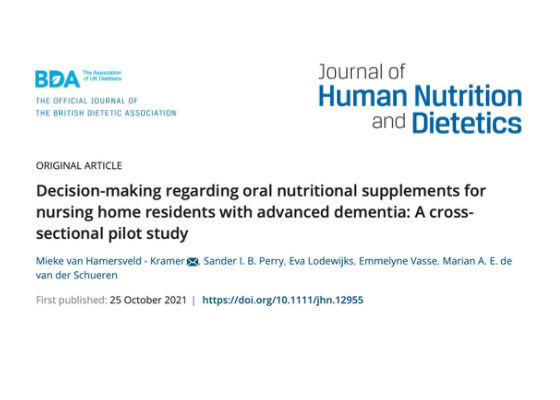 Published in Journal of Human Nutrition and Dietetics, October 2021

Oral Nutritional Supplements (ONS) are often used in nursing homes for residents whose dietary intake is insufficient. For those with advanced dementia and unable to make the decision for themselves, a surrogate decision-maker (SDM) such as a dietitian or physician will make the decision on the use of ONS. This decision may take into account a broad range of factors, which may differ between different decision-makers. To understand this further, van Hamersveld et al (The Netherlands) assessed if SDMs differed in the factors they considered important in the use of ONS and whether or not ONS is considered a life-prolonging measure.

A survey was conducted of dietitians, elderly care physicians and SDMs of nursing home residents between January 2018-October 2018. Online surveys with a set of pre-defined situational and personal factors were sent to participants in which they were asked to rate each factor for the perceived level of influence (Likert scale 1-5) on decision making when considering ONS for nursing home residents. Participants also ranked the factors in order of importance and stated whether they consider the use of ONS as life-prolonging (yes/no).

Data was collected from 213 participants, 90 (42%) dietitians, 53 (25%) physicians and 70 (33%) SDMs. For 6 out of 11 predefined factors, there were significant differences in the rating of perceived influence between the 3 groups. Of all the pre-given factors, residents’ quality of life appeared to be the most important factor for all groups for influence and ranking. Also declared wishes were of importance with dietitians and physicians putting residents declared wishes concerning ONS in 2nd rank. Factors considered least influential were costs of ONS followed by residents’ age.

While all 3 groups agreed on the priority of the resident’s quality of life, they did differ on other factors and on the life-prolonging effect of ONS. The authors suggest future research on the use of a shared decision model to best consider all factors.