The conference opened on day two with an opening address by Professor Carel Le Roux, Irish Society for Clinical Nutrition and Metabolism (IrSPEN) Director and Professor of Experimental Pathology, University College Dublin. He discussed the topics the day would cover including both over and undernutrition. I found it interesting that Ireland was the first European country to designate obesity as a disease. He explained that the topics chosen for day 2 of the conference would reflect the diet, medication and surgical approaches to overnutrition and most importantly the multidisciplinary nature of IrSPEN.

The first talk of the day was chaired by Dr John Conneely Consultant General Surgeon specialising in Digestive Diseases at the Mater Private in Dublin. Professor Shahrad Taheri from Weill Cornell Medicine, spoke on the rising levels of obesity and type 2 diabetes mellitus (T2DM) in Qatar. He then focused on the evidence from the DIADEM-I trial the 1strandomised controlled trial in the Middle East using a lifestyle intervention programme and total meal replacement therapy (TMRT) to place diabetes into remission.

As can be seen in the graph below the DIADEM-I trial found a 61% remission of Diabetes Mellitus in the intervention group. In addition, he showed how atrophy can also be reversed, meaning essentially that the pancreas can renew itself once in remission. He noted however that the DIADEM-I trial focused on early stage T2DM patients compared to other studies meaning that there may be more potential for remission and recovery in those with earlier than those with advanced disease.

We then moved on to Professor Francis Finucane, Consultant Endocrinologist, at Galway University Hospitals and lecturer at NUI Galway whom I have heard talk at several other talks before. He started his talk discussing the multiple approaches for obesity treatment, including dietary options, physical activity, bariatric surgery. He explained that out of these different approaches, meal replacement options often generate controversy due to the evidence available. He explained that the myth that large, rapid weight loss is associated with poorer long-term weight loss outcomes compared to slow, gradual weight loss is simply not always the case. I learned from this talk that there is a role for intense calorie restricted weight loss in severely obese patients in the short-term in order to get long-term health benefits such as improved HbA1c and cardiovascular measures associated with weight loss.

He also discussed the Lean et al. DIRECT trial which found that some patients with T2DM can achieve much greater glycaemic control with meal replacement programmes followed by a weight maintenance strategy. The key issue in Ireland is that there is no government funding for meal replacement programmes and this excludes and impedes access to large patient groups such as the unemployed or on disability benefits (65%) and those on a medical cards (70%). As such ‘milk-based’ meal replacement programmes were created as a less expensive option using approximately 2.5 litres of semi skimmed milk each day (depending on the patient protein requirements) alongside supplementary salt, fibre (fybogel) and multivitamins.

Professor Finucane’s Galway centre was the 1st bariatric outpatient clinic in Ireland to use an adapted milk-based meal replacement programme to treat patients with obesity. His team first had successful results with a single 45-year-old patient with severe obesity and high HbA1c, resulting in weight loss and better glycaemic control. Then they conducted a cohort study with a larger group using the milk-based programme which resulted in an average of 23 kilograms in weight loss, improved HbA1c (from an average of 66.3 to 48.4 mmol/mol) and alanine transaminase (ALT) results in those who completed the programme. He concluded that his team do not currently use a milk-based meal replacement as they do not have a Dietitian on the multidisciplinary team, and patients require regular monitoring to undergo this treatment. See case study and follow-on retrospective cohort research articles from Galway below.

The next session was chaired by Professor Chris Collins, Clinical Lecturer in Surgery in the National University of Ireland, Galway and University of Limerick. Dr Alex Miras, Consultant in Endocrinology and Obesity Medicine, and Lecturer at Imperial College London discussed the evidence that anti-obesity medications (aom) such as orlistat, semaglutide and liraglutide can be successfully used to place diabetes into remission, as well as for weight loss.

Dr Carl Neff, Consultant Endocrinologist and Obesity Physician at the Ireland East Hospital Group and Researcher at University College Dublin then went on to discuss how these anti- obesity medications (aom) can be implemented in practice. He first pointed out that obesity is a multifactorial aetiology disease which means Doctors and health care professionals need to think about all aspects of a person’s environment in devising an effective treatment plan.

The first medication Dr Neff focused on was Orlistat as it has been around a long time and has lots of research to back up its effectiveness. Unfortunately, how the drug works, is also what causes the undesirable gastrointestinal (GI) side effects for patients. The most important element of using orlistat is that patients are aware of the need to have a very low-fat diet when on the medication.

He then discussed liraglutide 3mg which is more expensive but has also shown good results for weight reduction (6-7% from baseline). However, the 1.8mg version, is covered by the drugs payment scheme as its used to treat T2DM and also gives almost 5% weight loss in patients with obesity. The important thing is that patients stick with the treatment even if they are getting some GI side effects. Semaglutide is another safe medication to use for diabetes and obesity and seems to perform better at lower doses than liraglutide treating cardiovascular issues as well. I note that he concluded that anti-obesity medications are effective and safe to use but they should be prescribed alongside diet, exercise and lifestyle advice.

The theme of ‘Repositioning Nutrition in Healthcare’ was felt throughout the conference and particularly so in the after-lunch presentations chaired by Professor Clare Corish from University College Dublin. Two talks on aspects of the Health Research Board (HRB) funded ONSPres study were presented. This study looked at the management of malnutrition and prescription of oral nutritional support in the primary care and community settings. The first talk was by Dr Sarah Browne who gave a background to malnutrition in Ireland where approximately 145,000 people are malnourished or at risk of malnutrition each year. Additionally, she discussed the associated risks and costs attributed to malnutrition which has negative implications for health, quality of life, and mortality. 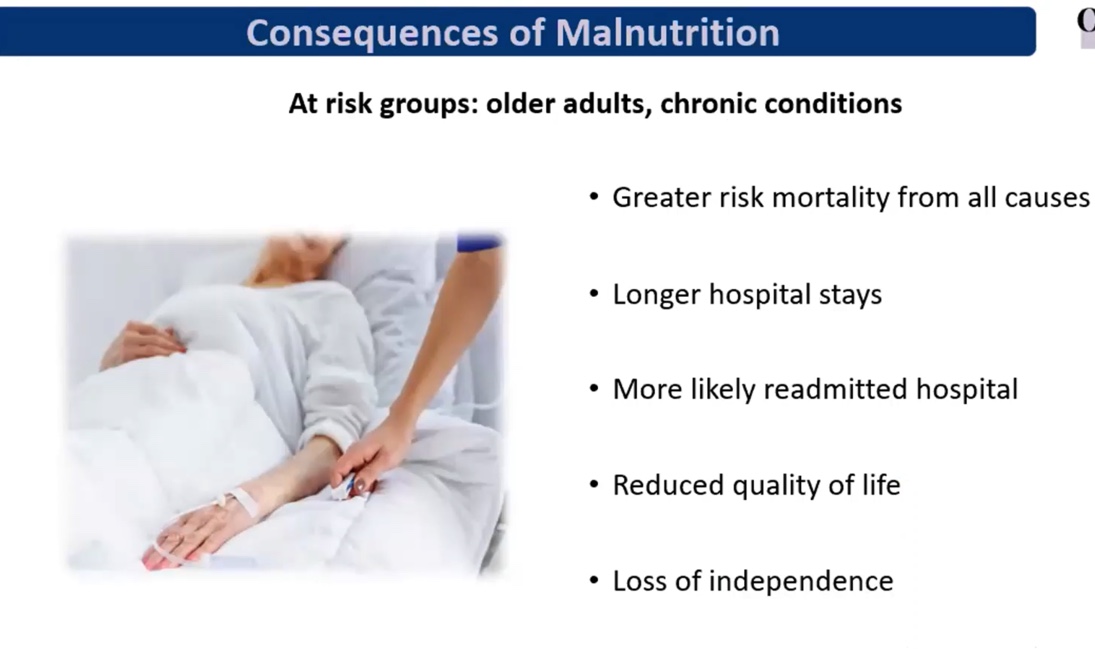 Many patients in the community reported relying on family, friends and neighbours for help after hospitalisation, while others with malnutrition didn’t get referred to a community Dietitian but would have liked more support.

My biggest learning from this session was the clear need for more Community Dietitians in Ireland, and to educate other HCPs in the risks and costs of malnutrition so that they understand the clear benefits in helping to reduce it. Malnutrition management requires the whole multidisciplinary team to be effectively managed in the community. General practitioners (GPs) are the first point of contact and the main prescribers of oral nutritional supplements (ONS) for individuals in the community who are malnourished or at risk of malnutrition but often get very little education on the different products available so are unsure as to whether they should change or cease ONS. They also reported that they don’t feel they are able to refer to their local community Dietitian for malnutrition or reported that they had no access to one. With GP visits on the rise and increasing demand for their services, along with an aging population the importance of adequate funding, regular professional development and resourcing is key for effective community malnutrition prevention and management programmes to ensure that the whole multidisciplinary team is involved in patient care.

Further research on the ONSPres study was presented by Dr Aisling Geraghty, clinical health researcher in University College Dublin. What was particularly interesting from her talk was an app which they created for GPs to educate them on malnutrition, the MUST screening tool, and treatments such as food first approaches and ONS. While it is still in its pilot phase it showed marked improvements in GPs knowledge of malnutrition in those who completed the modules.

Finally, we heard from Fiona Ward, Dietitian Manager at Our Lady’s Children’s Hospital (CHI) Crumlin who discussed home enteral feeding in children in Ireland and the clear need for patient Dietetic support and care pathways in the community in particular for those on longer-term enteral feeding.

Attending a conference is always a very worthwhile experience and 2021 has made it so much more accessible for students with online virtual platforms, cheaper tickets and the ability to watch talks back at a later date. I hope this is something the profession keeps going forward so students can be involved in keeping up to date with new research!